I'm just about to record a half-hour internet radio show with Michael Cornetto of Simply Scripts. He's the man behind The Dark anthology, a horror series made in Moviestorm. He's based in Melbourne, Australia, one of the co-hosts, Pia, is in Gainesville, North Florida (a few hours drive from me), and the third guy, Don, is in Virginia, so we're doing it all via Skype.
The show, Simply Radio, is aimed primarily at scriptwriters, and we'll be talking about how Moviestorm can be useful to creative people who normally aren't involved in the film-making process. I'm not sure when it's going out, but when I do, I'll let you know.
Posted by Matt Kelland No comments:

A visit to Texas

I rounded off my week with a short trip to Texas. It's quite a drive from Central Florida, so I went via Skype, which meant I could be back for lunch.
Over at the University of North Texas in Denton, James Martin teaches filmmaking (not to be confused with the James Martin who does iClone's training). He's running a new class on visual storytelling, and is getting his students to use Moviestorm as a fast, easy way to tell their stories. They asked me to come in and chat to them about it, and what makes it different to working with other animation tools or film techniques. And, of course, to get their feedback on what they like and don't like about the software.

I really enjoy working with students, and being able to pop into a university 1200 miles away without leaving my house feels magnificently futuristic. They were also amused every time my small black kitten decided to climb up the back of my chair and perch on my head. Well, James did specifically say he wanted an informal session! It's a great indicator of the way education's changing too: using technology is totally transforming the learning process in so many ways, and it's all so very different to when I was at university in the mid-1980s.
I'm really pleased that James has asked me to be one of the evaluators of their final projects. The class have agreed to let us follow their progress throughout the rest of the semester as they take their stories from initial concept to finished movie, as well as learning how to use Moviestorm. They've got some ambitious ideas, and it'll be extremely interesting to see how they meet the creative & technical challenges they've set themselves. I'm really looking forward to seeing what they make, and if they give me permission, I'll share some of it with you as we go.
Posted by Matt Kelland 1 comment:

Skeletons Released into the Wild!

Well, the time has finally arrived!

A few lucky users will have already received an email with the download instructions for the Moviestorm Skeleton files.

Over the next couple of days, we'll be updating the list of video tutorials so that our pioneer modders will have all the information needed to export characters, props, animations, accessories, etc. from their chosen 3D package into Moviestorm.

As you can imagine, this is quite a scary time for us. We're hoping that this will lead to a wider modding community, of users who are able to generate their own quality content within Moviestorm, but it does kind of feel that we've opened Pandora's Box! Time will tell... Hopefully with our users' help, we will soon be able to define export processes from all the major 3D tools for content that is then useable in Moviestorm.

For those of you that applied for the skeletons, but haven't yet received an invitation, don't worry. We will arrange a second batch as soon as we can, and we won't ignore anyone.

There is also a dedicated forum to this project in the Modding Section of our message boards, and you can bet we'll be popping in from time to time to see what's happening! 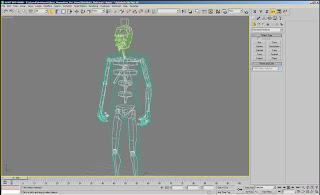 Just a quick note to update you keen modders on the release of the Moviestorm skeletons...

For the people that have registered their interest in joining the Beta program for the skeletons (for want of a better phrase), we sent out a short email explaining why the release has been slightly delayed. Basically, we've recorded a few tutorials using Camtasia screen grab software that show how we use the data here at Moviestorm, to try and give you guys as much of a head start as possible. We're now at the stage where all this stuff has been recorded (with nice voice-overs, explaining the processes), but the file sizes for the videos are huge (many gigabytes)! So, a little re-packing is required, then we'll get the pack put together and ready to go out, in a more manageable bundle.

For our first group of users, we already have more than enough requests. But don't let that stop you, just drop us an email at art.team@moviestorm.co.uk if you are interested in getting hold of the skeletons, and we'll keep your contact details on record for the next round of releases, which will hopefully become more and more user-friendly as the pioneers point out the flaws in the export processes.

Ben finally recovered enough to make it into work and build the patch for the Valentine's Day pack, so you can now get it directly from the Moviestorm launcher as well as from the Web site.
Just hit Get More Content when you start it up, then you can rent or buy it (or try it free for 7 days).
Posted by Matt Kelland No comments:

On Friday, we told you we were releasing the Valentine's Day pack in two stages.
"Unfortunately Ben, who's the mastermind for the patches, was taken ill and had to go home early before he could complete the patch creation process. Rather than have someone else take over part-way through, and risk screwing up what he'd already done, we opted to put the tested standalone version in the marketplace today, and let Ben complete the patching on Monday when he's recovered."
Of course, we assumed that Ben would be back on Monday. He's still unwell, so we're having to delay the release of the patch a little longer. In the meantime, you can still get the pack from the Marketplace.
Posted by Matt Kelland No comments:

We released the Valentine's pack today. Normally we don't release on Fridays, but since Valentine's Day is only ten days away, we figured we shouldn't wait till Monday.
You'll notice from the announcement on Moviestorm News that you can only get it from the Marketplace until Monday. if you fire up Moviestorm and hit Get More Content, it won't appear. This is because of the way we package the addons. We have to make two versions of each addon pack. One's a standalone version that goes into the marketplace so you can download the pack from the Web site. This was ready yesterday as planned.

Then we make a second version of the pack which is a patch update, so you can get this directly from Moviestorm without going to the Web site to purchase it. Unlike code updates, these get flagged as optional updates, so you only get them once you've got a license to the pack. The patch then has to get tested separately to make sure it shows up in the Moviestorm launcher and installs properly. We didn't manage to get to this bit yesterday, and were planning to do it today.
Unfortunately Ben, who's the mastermind for the patches, was taken ill and had to go home early before he could complete the patch creation process. Rather than have someone else take over part-way through, and risk screwing up what he'd already done, we opted to put the tested standalone version in the marketplace today, and let Ben complete the patching on Monday when he's recovered.
Sorry for the inconvenience & any confusion - however, this way at least you can get the pack now instead of waiting.
Posted by Matt Kelland 1 comment:

At long last, we've got the skeleton data ready to ship out. Before we put it on general release, we're looking for 5 or 6 experienced modders to check it through and make sure it all works OK in a modding environment.
What we're asking of our beta crew is this:
To register your interest in being part of the beta crew, please email art.team@moviestorm.co.uk. Numbers will initially be very limited. We'd like initial feedback from you in the next few weeks, so if you're not going to have time to look at this any time soon, please don't take a spot that someone else could use.
Posted by Matt Kelland No comments: