If you head on over to http://www.moviestorm.co.uk/ you'll see that it's all rather different.
Well - some bits are different. Some bits are still in the process of change, but a lot of it has been updated to a new shiny black look. Long-term Moviestormers may even remember our very first Web site, which was black as well. I guess that means black is the new new black or something.
Let us know what you think!
Posted by Matt Kelland 1 comment: 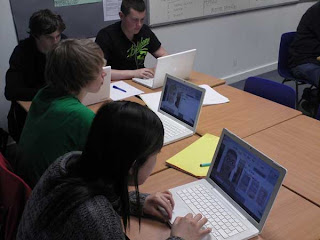 At the end of last week, Alex and I had the pleasure of going into Long Road Sixth Form College, Cambridge to show some of the L2 students how to use Moviestorm for an upcoming project that they have to complete as part of their Media Studies course.
As we had the opportunity to spend most of the day with the class, Alex introduced the students to the Set Workshop view in the first session and then we answered a few questions while they practised making their own sets within Moviestorm. We had just enough time to demonstrate the Dressing Room and Directors View before lunch, and finished the day with the Camera Workshop View and Cutting Room. The students picked up the software very quickly and were able to start assembling scenes in a very short time (despite a couple of hardware issues that we have brought back to the dev team to find solutions for), and seemed comfortable finding solutions to their problems between them when they got stuck. Seeing their progress was a testament to their computer skills, and also reinforced our beliefs that most people can get a project up and running in Moviestorm within a day, even if they are new to the software.
We'd like to thank Steven Thorne at Long Road Sixth Form College for allowing us to come in and demonstrate Moviestorm, and to the students for being so receptive. We look forward to returning and seeing your movies in a few weeks' time!
Posted by Amos Willbond 2 comments:

We've written a lot on the main blog recently about how you can use Moviestorm to practice film techniques. Several people contacted us to ask whether we had any specific examples of how to do it. I’ve therefore been putting together a collection of simple exercises you can do to learn specific techniques, under the working title Making Better Movies with Moviestorm.
These exercises are all fairly adaptable. Generally, you don't need any particular packs or content: any version of Moviestorm will do. Most of them work on the same principle: take a single scene, and film it in several different ways. You can use the same scene over and over again if you want - I often use a short scene from one of Per Holmes's training DVDs, and another, slightly longer one, from a parody soap opera I was working on some years ago. This is actually a pretty good way of working, as you can focus explicitly on the one aspect you're practicing, and reuse much of what you've previously done; sets, characters, recorded dialog, and so on. You'll also develop an increasing empathy with the scene, and you'll find each take getting better and better, rather like a musician practicing the same piece over and over. When you've worked your way through several exercises, you can compare all the different versions with your first attempt, and see what you've achieved.
These exercises aren't specific only to making movies with Moviestorm. They're standard techniques that apply to all forms of film. For example, one focuses on filming a scene without moving cameras, and then filming it again but allowing the camera to move. Another requires you to shoot the same scene with and without extras. You can then take what you've learned to any other film-making medium - full CG animation, live action, or whatever. The advantage of using Moviestorm is that you can practice when it's convenient for you, and you don't need to assemble a cast and crew each time. And if you're not happy with what you've done, you can easily go back and do it again and again until you're satisfied.
Each exercise takes somewhere between an hour and an evening, depending on what's involved and how long you want to spend on it. Each one uses a standard format:
I‘ve so far written up about half a dozen of these, with around ten more sketched out. Before I release them, however, I want to make some videos that will show what each exercise is highlighting (i.e. the same scene filmed with locked and moving cameras), and possibly create some downloadable Moviestorm movies that you can use to get going.
We’ll probably release these exercises initially through the blog, then we’ll collate them on the Web site. If there’s demand, we’ve been talking about putting them into an ebook for wider release.
Posted by Matt Kelland No comments:

Sometimes, moderating the comments on Moviestorm News brings us a chuckle. Here's the best spam comment on the blog today:
"I totaly correspond with your period attendant! I look up to the stuff you office and the quality selective information you offer in your blog! Keep ready the awesome exercise fellow."
Yes! I shall keep ready my awesome exercise fellow!
Posted by Matt Kelland 1 comment:

We have replaced our payment system provider due to an unacceptable level of problems. If you are one of those who encountered billing problems, please accept our apologies.

If you have any queries, problems with broken accounts, renewal problems, or any issues at all with the new system, please contact us on support.team@moviestorm.co.uk or via the support system on the Web site.
Posted by Amos Willbond No comments: