Short Fuze at GC and DragonCon

My carbon footprint is beginning to look like Yeti tracks. This weekend, I'll be speaking at the Machinima panel at GC in Leipzig (11am on Saturday and again on Sunday), and the following weekend I'm on the machinima panel at DragonCon in Atlanta.

Feel free to stop by and say hi, and tell me what you think of Moviestorm.
Posted by Matt Kelland 2 comments:

Over the weekend the first demo of point-lighting appeared. There are many issues to be resolved, but I can't wait to see this using depth of field as well! 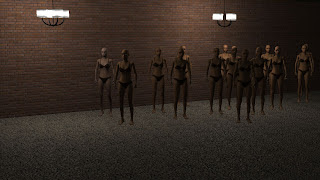 I've just come back from sunny Burbank, where I've been recording an interview for Digital Production Buzz, an excellent weekly internet radio show for indie moviemakers about the ways in which digital technology can change the way movies are made. I was supposed to be broadcasting live, but I'll actually be on a plane home at the time, so we pre-recorded the segment.

The host, Philip, was really excited by Moviestorm, even though there isn't a Mac version yet. (Real film people use Macs - I've had that well and truly drummed into me over the last two weeks!) The DPB audience is a little more hardcore than I'm used to - it's mostly people who make proper movies with, you know, cameras and actors and stuff, rather than machinimators. It's also slightly strange talking about Moviestorm on radio, when you can't show it to anyone, but it seemed to go OK.

Catch the show live tomorrow (6pm California time on Thursday), or grab it from the archives later in the week.
Posted by Matt Kelland 1 comment: