Over the weekend I was very excited to receive the final proofs of The Machinima Reader. It's the first serious textbook about machinima, edited by two academics who've been involved with it for about a decade, Professor Michael Nitsche of Georgia Tech, and Professor Henry Lowood of Stanford.
The Machinima Reader will assemble the first collection of essays to critically review the phenomenon of Machinima from a wide variety of perspectives.

Machinima is on the verge of stepping beyond its chaotic mix of artistic, ludic and technical conceptions into established traditions and vocabularies of contemporary media. As machinima invents itself, the flexibility of its form poses an interesting challenge to academics as well as artists and critics. We want to offer an inaugural reader for the further development and critical discussion of Machinima, one that charts its growth from several angles and also provides a foundation for critical studies in the future.

They first talked to me about the book nearly five years ago, and asked me to contribute an essay. After 25 years of writing as a journalist and for business, it was very strange relearning the discipline of academic writing. It's taken Michael and Henry a quite while to find a publisher, and go through all the rigours of academic publishing, but it's very nearly there now. The book's been picked up by the prestigious MIT Press, and should be available early in 2011. Mind you, last year I wrote that it was due to be out "in a few months", so don't hold me to that.
I haven't yet seen any of the contributions by the other authors, so I'm personally looking forward to this very much indeed!
Posted by Matt Kelland 3 comments:

You may notice that we've added a load more sites to the link list on the blog. (If you're reading this on Facebook, you'll have to go to the original post to see what I'm talking about.)
We're always open to recommendations for more. We're looking for sites that are about:
Please feel free to make suggestions!
Posted by Matt Kelland 3 comments:

Email ThisBlogThis!Share to TwitterShare to FacebookShare to Pinterest
Labels: blog

We've now told you what Chris and Dave are doing over the Christmas holiday, so I suppose I should tell you what I'm going to be doing. I'm aiming to get some more Moviestorm Made Easy video tutorials made; it's been nearly three months since the last one.
I've done about 45 so far (here's the full list). What should we cover next? Suggestions include:
Any preferences? Anything obvious I've missed? I'm not planning on covering modding.
Posted by Matt Kelland No comments:

Email ThisBlogThis!Share to TwitterShare to FacebookShare to Pinterest
Labels: tutorials

Here's a first look at Chris's male castle dwellers we mentioned earlier. 8 costumes (oops, only 7 here, duplicated one by accident), clean and dirty variants, all tintable.
Chris is aiming to do the female costumes over Christmas - screenshots as soon as we get 'em!
Posted by Matt Kelland No comments:

Here's a first look at what Chris has been doing in his spare time: constructing a castle constructor set. It includes over 100 parts, all customisable and tintable: walls, towers, blocks, steps, flags, roofs, doors, corridors and a rope bridge.
He's hoping to have this finished over the holidays for release early next year, probably around the same time as the swords pack. He also let slip that he's got some peasant costumes in the works, and is planning some jumps and rolls and possibly some horses, though those will probably come later. Combined with squirrelygirl's growing collection of mediaeval mods, this should be enough to open up a whole new genre for Moviestormers.
Posted by Matt Kelland No comments:

Partial transcript of a phone call between Cambridge and Florida. Released with minor redactions.

Date: 13 December 2010
CB: Moviestorm Command Headquarters, Cambridge, England
FL: Moviestorm Propaganda Unit One, Orlando, Florida
CB: [indecipherable]
FL: Operation Groundswell? Isn't that the super-secret project you've been working on since late 2008?
CB: Correct. We're putting it back into active status with immediate effect.
FL: If I recall the briefing correctly, this would give you the power to raise or lower the ground simply by pressing a single button.
CB: [indecipherable]
FL: Isn't that too much power to be putting into the hands of ordinary people? They could create giant hills or rolling sand dunes? How would actors be able to move around without falling down or experiencing interdimensional clashes like last time? Terrain modification is dangerous stuff.
CB: We've thought of that. We'll simultaneously be deploying WST. [Note: this is believed to be Walking on Slopes Technology, an experimental process that enables actors to free themselves from the constraints of flat surfaces.] We've got the prototype code from [redacted] and we just need to [indecipherable].
FL: When do we expect first test results?
CB: Operations will commence as soon as the primary dev team have left the office for Christmas holidays. It's safer that way. With luck, we'll have achieved basic stability by the time they return.
FL: And when do we anticipate full external deployment of Groundswell?
CB: That depends on the preliminary test results. Assuming it's non-hazardous, early in 2011. If things don't go as planned, we'll just mothball it again until it's safe for another attempt, and ensure nobody finds out about it.
FL: [indecipherable]
CB: Let's hope not.
[Transmission ends]

This information is presented for the benefit of the public, and not for commercial gain. We have many more of these transcripts, and will release them if Moviestorm continue to withhold information.
Posted by Matt Kelland 1 comment:

Email ThisBlogThis!Share to TwitterShare to FacebookShare to Pinterest
Labels: terrain

This will probably be the last dev blog post of 2010, unless one of us has a sudden burst of enthusiasm and free time in the next couple of days. Most of us will be starting our Christmas holidays later this week, and won't be back in the office until the New Year.
We'll still be keeping an eye on the forums and support emails throughout the season. Response times may be a little slower than usual, so bear with us. 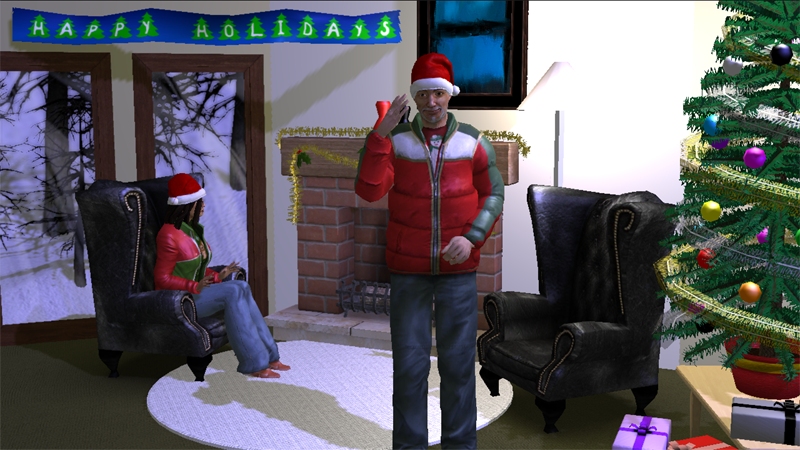 The patch formerly known as 1.4.1.2 is now live. It's now called the Starter Movies Update for reasons that have a lot to do with the underlying code structure of Moviestorm and which bits have actually been updated. As always, just start Moviestorm and it'll get the update for you automatically.
We've made some important changes to the launcher that probably won't be obvious to you, but which will resolve some really annoying issues that have been affecting some people.
There's also the new Shut Eyes & Open Eyes gestures we mentioned the other day, and we've fixed some issues with female nose morphs.

The biggest part of the update is a selection of new starter movies, depending on what packs you have:
*Created by Jorge Campos, aka act3scene24
That should be it for this year. The next scheduled update will be 1.4.2 (unless we rename it The One With The Sword Stuff In), due for release in January 2011.

The next pack in the works is a small pack of school uniforms and a few other classroom bits and pieces. We've recently been getting quite a lot of interest from schools wanting to use Moviestorm for a variety of reasons, and this is something that both teachers and students have asked for. (Note that we're not making child characters at this stage - it's more sixth form / 11th grade age.)
We're aiming to get this out in January.
Posted by Matt Kelland No comments:

Give your friends a movie studio

We had an email the other day from our good buddy Santa, up in the North Pole, and he tells us he's had simply thousands of letters this year from kids telling him that what they want most in the whole world is some cheap, easy movie-making software. Now obviously, he may well have got into the whisky a bit early this year, and he's prone to exaggeration now and again (Round the whole world in one night, stopping off at all those houses? A likely story!) but there's probably a grain of truth in what he says.
So, since we couldn't bear the thought of all those sad little faces on Christmas Day, crying "Mommy, where's my virtual movie studio that Santa promised me?" we're in the process of fixing up a little feature on the Web site that will allow you to buy Moviestorm as a gift for someone. It's just going through testing now, and should be out later this week.
Posted by Matt Kelland No comments:

Let's not fight about this...

A couple of weeks ago, we were planning to ship you the new swords pack in time for Christmas. Sadly, that's not going to happen. We're just in the process of wrapping up the 1.4.1.2 release, and the sword-fighting code didn't pass muster. There are a few bug fixes in 1.4.1.2 that we really want to get out as soon as we can, as they're causing some people real headaches. So, rather than delay everything else for that pack, we decided to ship 1.4.1.2 without the sword-fighting code, and we'll get it out to you after the holidays.

It's nearly there, though, and looking good. We've got a bunch of swords, a whole heap of fighting animations, and Chris made a couple of new swashbuckly costumes.
Posted by Matt Kelland 2 comments:

Jules is a master of many puppets (or is that a pastor of many muppets?), and one of his minions is the Moviestorm post-processing filter system. When he gets a spare moment (ahahaha), he might actually have a rummage around and see what's missing in this rather awesome toolkit of image processing, and implement it. So here, from him to you, is an entirely new set of visual functions to apply to your movie, hardware allowing. In no particular order (ie alphabetical):

All of these images are 100% Moviestorm. No other programs or post-processing effects were used to create these screenshots.
So that's filters03 for you. A whopping 13 new effects to help you make the movie you always wanted to, and you can get your hands on them very, very soon. This week, if Father Jules thinks you've been good enough.
Posted by Matt Kelland 4 comments:

This just in from the dev team...
Matt - There was a thread on the forums last week about a request for a "close eyes" animation, for dead people, or people sleeping etc. An animation has been created and will be distributed as an upgrade to the base pack with 1.4.1.2.
Translating that into English, the "close eyes" animation will be part of the standard Moviestorm, not part of a pack, and you'll get it free. We're aiming to ship 1.4.1.2 before Christmas, hopefully later this week.
Posted by Matt Kelland 3 comments: