One of the first things I do each morning, after I've set a pot of thick black coffee brewing in the Short Fuze kitchen, is to check the Moviestorm forums to see what's been said while I was asleep. Recently, I've been able to get daily feedback from the members of our Pioneers Club, who've been given early access to Moviestorm 1.1.7.

I've been delighted by the amount of feedback we've received, but not as delighted as the members of Moviestorm's QA department, who spend each day eagerly aggregating the responses from our Pioneers, and diligently recording them in our issues database.

The guys in QA are very, very good, but we know we won't be able to catch every single bug: there's only a few of us, and Moviestorm is huge. So, the abundant feedback from the Pioneers has been incredibly useful to us. The comments and bug reports have come in all shapes and sizes. Overman kicked things off with a short movie demonstrating some of the new features of 1.1.7. He sneakily hid a bug report at the end of the movie - not the first time he's done that, the little scamp.

Other pieces of feedback ranged from the mundane to the bizarre. In general, the Pioneers seem to be very pleased with 1.1.7, and excited by the new features. forgeuk made a post with a title which simply read "Whooosh! It's damn fast!" 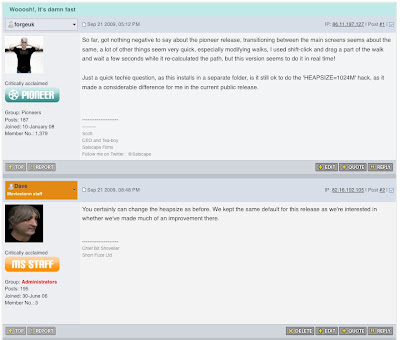 There's no denying that it was a beta release, though. Some of the errors have been very strange. czechboysonic found a bug with a custom addon that didn't seem to load in 1.1.7. 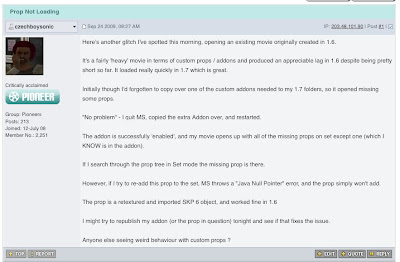 Ben eventually tracked it down to a case-sensitivity error - just the sort of thing we might never have spotted without help from the Pioneers. 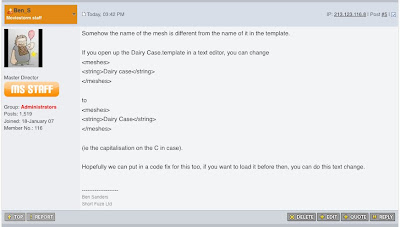 A release as big as this one inevitably contains new code and fixes which we haven't explicitly talked about. Sometimes, though, things get fixed that even we didn't know about. act3scene24 has never been able to quit Moviestorm properly on his Mac, and always has to force-quit the application in order to exit. Not any more: 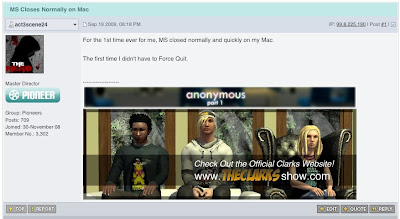 We'd look terribly unprofessional if we admitted that we have absolutely no blasted clue how we fixed that bug (since we have no blasted clue what was causing it in the first place) so in order to save our blushes I'm happy to lie and say that I fixed it. Yup, that was all me. Thousands of lines of late-night coding have paid off.