This bud of love, by summer's ripening breath, May prove a beauteous flower when next we meet.

Back in the olden days, when Moviestorm was still a young whipper-snapper of a movie-making tool with very few of the cool features it has today, we made a series of short parody movies to show what Moviestorm was capable of. The movies were made by Michelle Pettit-Mee (a leading light of the machinima community, now working as part of Bioware's cinematic design team but back then the Machinimator-in-residence for Moviestorm) and were parodies of well-known scenes from film and television. We had a Pulp Fiction scene, a Phoebe-like Friends song ... and a short sequence that looked suspiciously like Baz Luhrmann's Romeo + Juliet.

We released the Romeo and Juliet costumes as part of a very early Content Pack, and they're still kicking around. We've learned a lot since then, though, and we've also improved what Moviestorm is capable of. Since it's Valentine's Day very soon, we thought it was about time that these two old favourites got an upgrade. 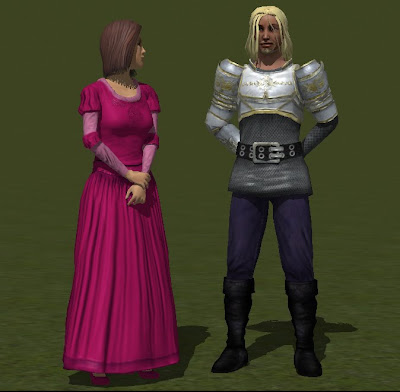 As you'd expect, both of these costumes are tintable.

We'll be making these available to you (along with a handful of other new assets) very soon. Stay tuned for some more sneak previews over the next few days!
Posted by johnnie

I went weewee in me pants.

I don't know why I'm telling you this publicly, it has nothing to do with this post.

Although I AM very excited!

That is lovely work.