Where do you start?

Occasionally, the company Skype logs reveal an insight into the way the dev team approach problems. Here's an extract from earlier today where they get to grips with an apparently simple and straightforward feature request.

Dave Holloway: Can a movie scene be saved so when it opens, the view is something other than default?

Dave Lloyd: No. Any suggestions for what you want? We did think about opening a movie where you last were - trad Apple HCI rules

Dave Holloway: Yeah, that kind of thing. So where I save, is where it opens again. In the grand scheme this might not be so useful(?) but that's the sort of thing I was looking for in this instance.

Rhys: personally, I prefer opening up in a default location. Makes it feel cleaner. Opening up where you last were seems like a good idea in theory, but I think it would just be better if you think upon loading, "OK, that’s fine, cameras still work, ah yes, editing," because most people don’t save and reload like we do for QA.

Johnnie Ingram: Another possibility is that, when you open a previously-saved movie, you get some sort of pop-up menu asking you to pick an intial View.

Amos Willbond: That would add another step to the process of opening your project... being devil's advocate!

Johnnie Ingram: Yeah, I agree. Not saying it's the right idea! :)

Dave Holloway: Yeah, was about to put what Amos put... nice feature, if it DID go in (and I'm not advocating this as a feature, just for something else) I'd have it as a toggle or something.

Rhys: I think just being put back in a default location tells the brain to re-initialise (I don’t know what the right word would be), which is a good thing, because, for example, in Photoshop, if you close it, it doesn’t re-open with your last project with the filters menu open, it makes a clean slate, just showing you what is happening. If that makes any sense whatsoever

Dave Lloyd: There's a big divide between "where you last were" and "always at the beginning". My current inclination is actually to go straight to the Cutting Room as that is becoming the control hub for the movie as a whole

Rhys: perhaps on the Load Movie screen, you could highlight the movie, and on the right of the screen there would be a "Load movie at: Default, last save, SW, CV, DV, CWV, CR, PV" menu, with a checkbox next to it, with Default auto-checked (and you could set your own default).

Dave Lloyd: Too much upfront - it doesn't take long to navigate from anywhere in MS to where you want to go.

Rhys: I guess. But a user-defined default would be handy.

Dave Lloyd: Yeah, we need to do more with the interface settings to customise for preferences.

Amos Willbond: If it's any contribution, all 3D programs remember the position of the non-keyable camera views upon reloading your project.

Amos Willbond: Yes, that’s essentially what they do...

It's so often the case that something that seems obvious isn't, and there are several ways of doing it, all of which are right for different reasons. Whichever we go for will have disadvantages. And while we could make everything customizable, that means more for us to code and test, and more for our users to set up. And, in my experience, you can never set it up right anyway. On something like starting view, if I set it to ask me every time, I'd get annoyed that it didn't know where I wanted to be, but if I set it to default to a particular view, I'd get annoyed when it sent me to the wrong one.

My favorite bugbear is whether to pick the set or the characters first. I've used Moviestorm both ways, and they're both wrong at different times. Sometimes you want one, sometimes another. And sometimes I want to pick the music first, or write the script first... sometimes there's no definitively right answer - it's enough to drive a dev team crazy! 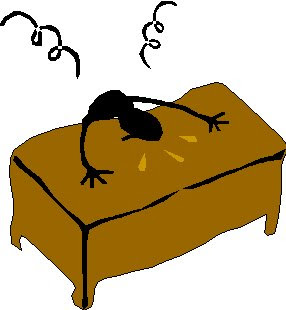 Email ThisBlogThis!Share to TwitterShare to FacebookShare to Pinterest
Labels: design, no right answer

It also seems that the short fuze folks spend more time typing and reading, and chatting than *doing*... :-)

(Thanks for sharing the exchange - it is interesting!)