The students on the BA(Hons) Computer Games Design course at University Campus Suffolk have been studying (and creating) machinima during one of the modules on their course. We were delighted that they chose to use Moviestorm as one of the machinima engines, and we've been keeping an eye on their progress for a while.

Yesterday, I hopped on a train to Ipswich and headed over to UCS to chat to some of the students on the course. I took Rhys with me, in an attempt to stop him attacking his own eyes with selected cutlery.

It was a very worthwhile trip. Chatting with the students on the course, and with Eddie Duggan the course tutor, gave us a lot of very honest and constructive feedback. We'll be adding all of their comments to our issues database. 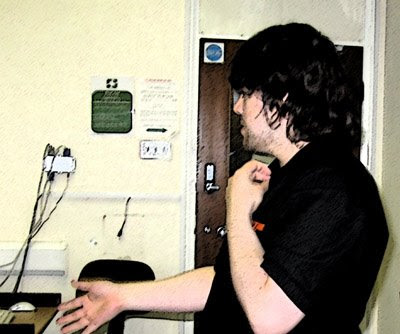 My honed and trimmed physique, captured in full educational ebullience by Rhys's sneaky camera skills
It's great to see Moviestorm being put to use like this, and it's always great to talk face to face with people in the Moviestorm community - especially when, like the students at UCS, they have a lot of complimentary things to say!
Posted by johnnie