Hello Moviestormers,
We've got another great asset for you to download as part of the Bonus Content this week, in the form of a rather useful wheelchair. Characters can sit in the chair, put their feet onto the footrests, and power the wheels with their hands. You can also animate the chair (with or without a seated character) by using the same shift-drag method as animating Moviestorm cars. 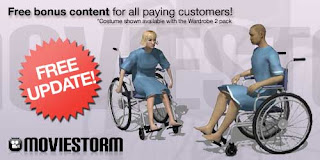 As before, this object will update automatically if you already have the Bonus Content Pack, or you can get the pack with this (and the previous bonus content) from the Marketplace page (if you are a current paying customer).
Posted by Amos Willbond No comments:

As promised in yesterday's blog post, we have just launched the new sniper rifle (plus variants and animations) which you can access through the Marketplace on the main site (here).
We're hoping to update the Bonus Content pack fairly regularly, as it gives us the opportunity to publish small items that may be a little too out-of-the-ordinary to warrant a full pack release.
If you already have a license for the previous object (the smart phone) then your AddOn will automatically update the next time that you start Moviestorm. Lastly, these items are only available to paying subscribers, so please consider upgrading if you're using an obsolete version or if you're still on your trial!
Posted by Amos Willbond No comments: 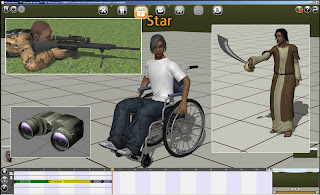 Moving onto the AddOns, we'll be updating the Bonus Content Pack this week to include a cool sniper rifle for all your action movies! This new gun will go very nicely with the crosshair video filters, helping you to create those secret agent scenarios. We also have a set of binoculars coming soon, and some costumes and props that will suit nomadic travellers, biblical characters and those of us who prefer looser fitting robes...
Finally, Ben's putting the finishing touches on the wheelchair (shown in the image top right) so that the characters will be able to get in and out of the chair and propel themselves around the set.
Posted by Amos Willbond 2 comments: 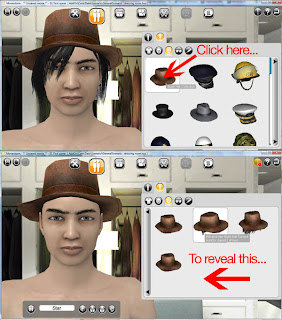 In addition to the code changes needed to support the new sword fighting animations, there's currently development in other areas of the program that should help our users get the results that they want out of Moviestorm.
Over the last few iterations of Moviestorm, we received the occasional comment from users that it would be nice if there was an option to turn the background mountains on and off, depending on your scene. As it happens the last time that it was mentioned, we were discussing the code changes that are required for the next release and this time, the feature made it into our list. Dave is in the process off looking into a mechanism to show/ hide the background mountains, and we're aiming to get this new functionality into 1.4.2.
Also, there's going to be new elements of the UI which will help organise multiple, similar items in the Dressing Room. This means that you will be able to select a hat (for example) for your character, and then decide on which sub-object of the hat you want from a separate panel. This means that you can have 20 variations of similar hats using only one “master” thumbnail, meaning that you don't have to scroll through every variation when you dress another character.
Posted by Amos Willbond 1 comment: